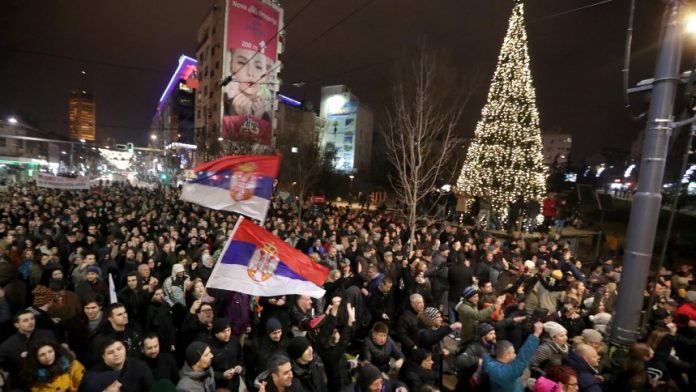 The protests against the Serbian President Aleksandar Vucic from: Around 25,000 people went to the fourth Saturday in a row, in Belgrade, on the road, like a Journalist of the news Agency AFP reported. Some of the demonstrators chanted slogans such as “Vucic thief”, or held up placards saying “Enough of lies” in height. Symbols of political parties were not to be seen.

Many of the participants wore whistles – as is the case with the mass protests in the 90s against the former Serbian ruler Slobodan Milosevic. Vucic had declared in the past few days, he was “ready to support the demonstrators citizens to listen to, but not the liars in the Opposition”.

The demonstrations, at 8. December had begun, are the first significant protests in Serbia since the spring of 2017, after the election victory of Vucic thousands of mostly young Serbs on the road were gone. His critics accuse him of ruling in an authoritarian fashion and to make the Opposition, the media and the civil society is muzzled.