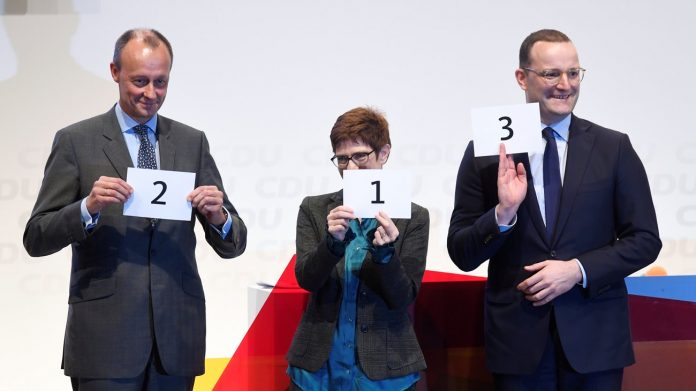 Contents page 1 — One, two, three, the candidates to come page 2 — Merz don’t want to talk about his competitors. Spahn, however, … On a page

read Even veteran party members can’t remember on Thursday evening in Lübeck, when the CDU was the last Time such a passionate – because the result was a Frank discussion about politics. Several Hundred members sit, stand, scurry through the former shipyard buildings of brick and steel Industry in the North of the Hanseatic city. It’s been over two hours, until the three candidates of the CDU chairmanship of discussion with the base. Nevertheless, the first chair is occupied rows.

regional conferences are expected to fuel the competition for the highest party office web. Lübeck is the first Station, and seven more are to follow. At the end of the first three hours of Lübeck, a young CDU-man going to be important, and with views of the candidate constellation, the most surprising question of the Night: “Can you make out the differences? We have now heard so often, where they are agreed.”

Unity of the surprise, as the charge is created the entire Format, but something like a talk show, only that it is not the host asking the questions, but members of microphones in the room. And finally, three, the CDU-candidate, which seem hardly compatible with each other: Friedrich Merz, the conservative liberal, the attacks after ten years of political hiatus to discuss here. Jens Spahn, a conservative menace of the German Chancellor, the young and the ambitious. And General Secretary Annegret Kramp-karrenbauer, the hardest task there is, at the same time by your sponsor, Angela Merkel, to sell, without appearing to be disloyal. The former is said to have an unbeatable feeling for the wishes of the base. The latter is considered to be a reliable choice – and therefore the favorite of the party Establishment.

makes The start of this Tour through the CDU Kramp-Karrenbauer with a brief presentation on the Los it wants. It begins with a own Version of Merkel’s election campaign Slogan, you know me. “It is nice to be back here and to see so many familiar faces,” she says. In fact, she was in her first months as Secretary General of tireless on-the-go on your so-called Zuhörtour to the party in comfortable and forms it a new principle of the program.

After a few minutes she herself is on the offensive on the topic, that makes you as a supporter of the Merkel-bearing, vulnerable like no other: the question of refugees. “Since the autumn of 2015, many have the concern of whether the CDU is the party of internal security,” she says. “We must not hide under the debate, the discussion should not paralyse us.” It promises processing. Indoor and integration experts next spring should come together and “be finally resolved: How do we assess the fall of 2015”.

Then Merz is in it. With a lot of hope, but not a few of the fear of connecting, the CDU will make it back to the party, which he joined in 1972. Merz asserts for the first time, it won’t happen like: “The CDU is a party of the center, one moves to the right or to the left,” he says. And because the ACC looks to him, a few eyes before the punch line with the rule of law has nabbed what he sees, of course, after he pushes quickly back: “The equipment of our soldiers is unacceptable.” He emphasizes each syllable, which is good, because otherwise everything would be “…-zeptabel” in the jubilation of the base.

“there Would have been with Merz, the AfD never?”, the newspaper Bild asked a few days ago on their front page. Merz throttles in the last few weeks, always back to itself, you don’t have to as the Would have-could-be-a candidate the day before Yesterday. But at the end of his talk it through with him: The CDU could stand at elections in the Federal and again at 40 percent, he promises: “And then I wouldn’t put it past me to cut in half the AfD with their voters.” A view so sweet and tempting that you will be fiercely applauded.