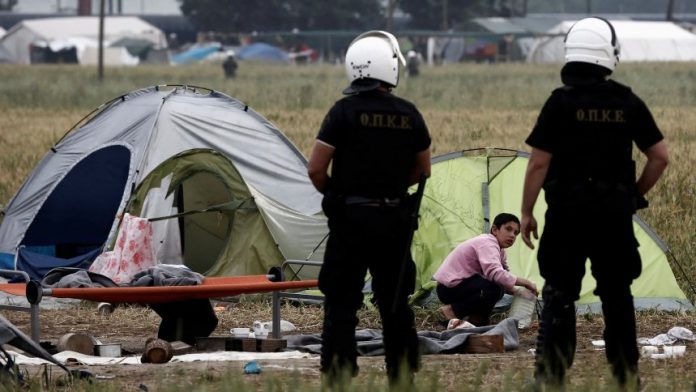 It should happen in broad daylight and secretly in the night, among other things, the border river Evros, which separates Turkey and Greece: For years, accusing human rights organizations of the Greek authorities, migrants, illegal in Turkey to deport. The lawyers of Theodoros and Antonis Karagiannis are convinced that now the so-called “Push-Back”operations to prove it.

Approximately on the basis of a case from the 5. November 2017. On the Morning of this day, a group of refugees sent messages, a Video and a location notification to Theodoros Karagiannis’ office in Thessaloniki. The people came primarily from Syria and Iraq. The lawyer identified the location of the migrants on the edge of a highway close to the Greek border town of Didymoteicho.

Together with his brother and colleague Antonis Theodoros Karagiannis made on the same day with the car on the way to Didymoteicho. On the phone, he asked police officers, the newcomers to pick up.

arrived As the two lawyers in the border town, gone were the refugees. Only hours later, Karagiannis received a further message in which the migrants reported that they were arrested by the police and in Turkey, were sent back. “It is this ‘Push-Back’ is not an isolated case but a common practice,” says Theodoros Karagiannis today.

European law obliges States to consider asylum applications before they deport migrants. Since the Europeans to foreclose, however, is always brutal against refugees, are the reports of “Push-Backs” at the border. Politicians who speak in the migration debate about “order” and “control,” silence on the alleged permanent breach of the law at the EU external borders.

Human Rights Watch documented in December in a report by 24 “Push-Backs” at the Greek-Turkish border. Greek policemen are refugees to the part of the abused, robbed, and in spite of sub-zero temperatures in my underwear back in Turkey sent. Three Greek NGOs reported in the same month, of 39 cases. “People who have committed no crime, be arrested, beaten, and Greece thrown in, without that their rights are taken into consideration,” says Todor Gardos of Human Rights Watch.

“‘Push-Backs’ are part of the war against irregular Migration”

The human rights defenders have been registered, especially at the Evros river such operations. Although Turkey and the EU in 2016, have concluded an agreement, which makes it easier for Greece to send refugees of the Greek Islands legal back in Turkey. The country border is, however, excluded from this Deal, which is why more migrants choose the Route via the Evros. This year, Greek authorities achieved according to December, more than 14,000 migrants in Greece over the land – almost three Times as many as in 2017. Migrants die trying to cross the Evros.

The government in Athens declares that in dealing with protection seekers, is always to comply with applicable law. Asylum law experts have criticized on the other hand, the authorities would deport migrants deliberately illegal, in order to reduce the numbers of Refugees. “‘Push-Backs’ are part of the war against irregular Migration,” says Metin Corabatir, the Chairman of the research Institute of asylum and Migration in Ankara.

Greece is not the only country which is suspected of breaking the law to migrants. Also on the border between Croatia and Bosnia-Herzegovina should come regularly to “Push-Backs”. Refugees in Bosnia, reports of violence by Croatian border guards. An engineer from Damascus told the MIRROR that he had been maltreated with electric but is not limited to, a family father from Pakistan complained that he had been brought picked up in Zagreb by police officers, robbed and back to Bosnia.

More on the topic of MIRROR+ Maria Feck/ THE MIRROR of the Balkan route, in Spite of the foreclosure of the Refugee rise in the number of

words of Praise from Chancellor Merkel

The NGO “No Name Kitchen” has listed since the beginning of the year 100 cases of violence by Croatian border guards. The Watchdog organization, “Border Violence Monitoring” is a video material to document several dozen cases of illegal returns at the Bosnian-Croatian border in September and October.

The Croatian government denies the allegations. The reports of the migrants could not be verified, said in a statement, the Ministry of the interior. And the EU is ignoring the human rights violations, as long as Croatia defends the refugees. German Chancellor Angela Merkel acknowledged in a Meeting with Croatia’s Prime Minister Andrej Plenkovic in August, the work of the Croatian border guards.

a lawyer Theodoros Karagiannis is ready to cooperate with the authorities to the “Push-Backs” at the Greek-Turkish border to educate. He says: “It is time that the Greek state and the European court of human rights to deal with this issue.”