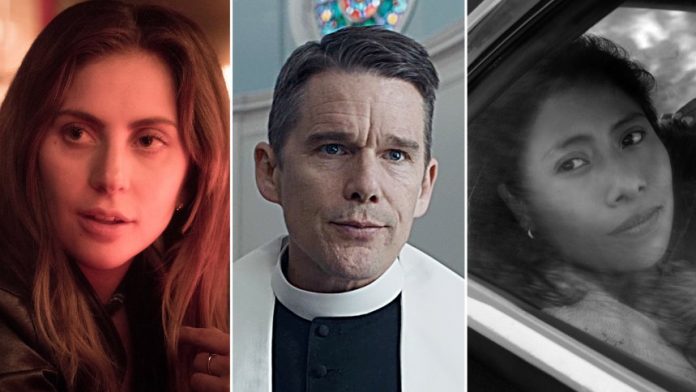 Rachel Weisz (left) and Emma Stone in “The Favourite”

Best Film
“BlackkKlansman”
“Black Panther”
“Cold”
“The Favourite”
“the Green Book”
“If Beale Street Could Talk”
“Roma”
“Spider-Man: Into the Spider-Verse”
“A Star Is Born”
“A Quiet Place”
comment: Great range and diversity, “Bohemian Rhapsody” will not win in the end anyway.

Best actor
Christian Bale, “Vice” (21.2.)
Ben Foster, “Leave No Trace”
Daniel Giménez Cacho, “Zama”
Ethan Hawke, “First Reformed” (still without the German cinema release)
Joacquin Phoenix, “A Beautiful Day”
comment: For the role of the doubting priest was born Hawke, this role, he has to live. A better time for an Oscar there could be for him.

Best cinematography
James Laxton, “If Beale Street Could Talk”
Hélène Louvart, “Happy as Lazzaro”
Sayombhu Mukdeeprom, “Suspiria”
Robbie Ryan, “The Favourite”
Lukasz Zal, “Cold war”
comment: When Zal and Pawlikowski turn up of your life together Black-and-white films in the Academy format, I would not complain. Mukdeeproms Horror-Pastiche stands out, however, as a single performance – at a truly iconic template.

Best non-English language Film
“Burning”
“Cold”
“Happy as Lazzaro”
“Shoplifters”
“Zama”
comment: The official favorite “Roma” has me in its obviousness does not irritate. The feverish fascination of the “Zama” stops, however, suddenly.

Best Film
“A Beautiful Day”
“Burning”
“Cold”
“Eight Grade”
“First Reformed”
“Happy as Lazzaro”
“If Beale Street Could Talk”
“Leave No Trace”
“Zama”
comment: Much of 2018, from US blockbusters such as “Black Panther” or “A Star Is Born was” the speech, to me, the Renaissance of the US appeared to be-Independent cinema to the greater artistic Triumph – and “First Reformed”, as the pioneering Film of the year.