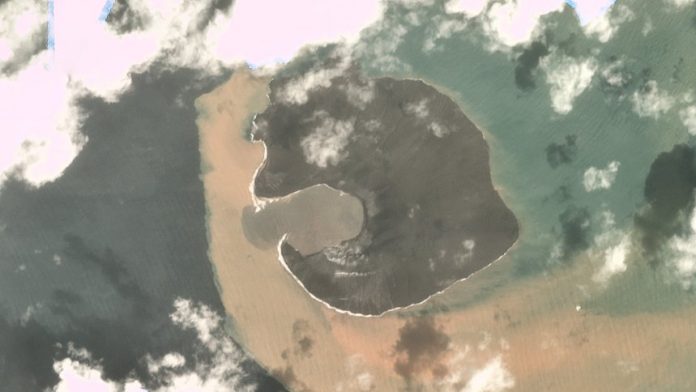 there is once a place Where a crater had nearly 340 metres high, and now a hole that is filled with water and a Bay makes: satellite images of the Indonesian volcano Anak Krakatau, have documented the vast extent of the most recent Eruption, which caused shortly before Christmas, a Tsunami and a large part of the crater blew up. The tidal wave, the people in the Region met completely unprepared. At least 430 people were killed.

According to Indonesian authorities, the volcano has lost two-thirds of its original mass, the crater is significantly shrunk. Before the Eruption he was well 338 meters from the sea, now there are only 110 meters, according to the Indonesian center for Volcanology. Under water-about 700 meters height, including the bottom of the sea. About 110 million cubic meters of Earth were slipped as a result of the outbreak into the ocean and triggered the devastating Tsunami.

volcano Anak Krakatau before and after the recent Eruption of Planet Labs, Inc

Poor weather conditions had long obstructed the view of the volcano cone. A photo satellite company Planet Labs got a hole in the otherwise dense cloud cover and shot a picture of the volcano crater. A comparison with previous satellite images of the volcano has shrunk. The image shows the crater in front of the devastating eruption was on 17. December. Already at that time it is Smoking from the vent.

The current recording is from a mini-satellite of the Start-up Planet Labs from the USA, the networks now operates one of the largest Satellite in the world. The satellite will weigh about five kilograms, and are designed to have a rather short life span. After a few years, you spin towards earth and burn up. Read more about it here.

The volcano Anak Krakatau is located in the Sundastraße, 80 kilometers West of the capital, Jakarta, and has been active for many years. In part, he shakes several Thousand Times per day. In the months before the outbreak, he had grown significantly, because of smaller eruptions had thrown millions of cubic meters of Rock to the surface.

Meanwhile, the volcano is less active, but authorities warn of further eruptions. In addition, parts of the Slope, threatening still slipping.

The Anak Krakatau is located in the same place as the Krakatoa, which exploded in a tremendous eruption in August, 1883, and was almost completely destroyed. The outbreak is considered to be the second-largest in the modern era and the world influenced even climate. Over the months, the temperatures fell worldwide by about half a degree Celsius compared to the long-term average. It’s a cool, rainy summer, which led to significant crop failures followed in several regions in Europe.

The former Eruption triggered a Tsunami, more than 36,000 people were killed. The flood wave was still felt in Europe. The ash clouds are to be increased up to 24 kilometers into the sky. The explosion was at least 10,000 times as powerful as the Hiroshima atomic bomb.

a Good 40 years after the eruption columns of Steam and debris from the clashed once again in a collapsed Caldera. Within a few weeks, the edge of a new crater that developed within a year to a small island was formed. Therefore, the volcano Anak Krakatau is called the “child of Krakatau”.

Indonesia is located in one of the geologically most active zones of the earth. The archipelago of well to 17,500 Islands forming the Western foothills of the volcanic belt, the horseshoe over 40,000 km around the Pacific and also as the “Pacific ring of fire” is known for.

Where tectonic plates collide, a massive geophysical forces. As a result, it comes in Indonesia to earthquakes, volcanic eruptions, and landslides. In Indonesia, there are about 130 active volcanoes, more than in any other country in the world.