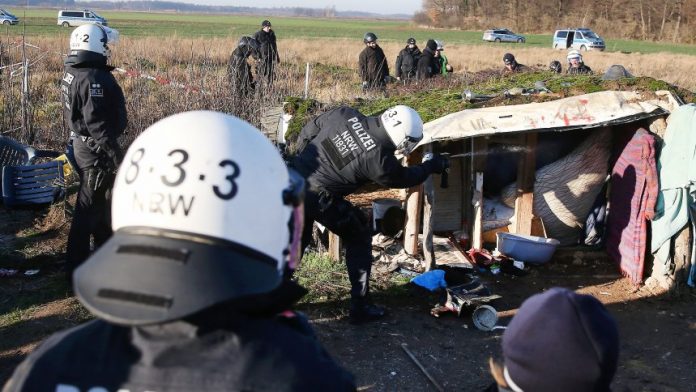 The police searched for new incidents in the hambach forest, the so-called camp of the brown coal opponents. Searched’m going to the tailors to Molotov cocktails or bolts, as well as to the means by which fire sets could be built, said a police spokeswoman in Aachen. Also a workshop in Düren, was the target of the RAID.

“It is not planned to vacate the meadow camp or the tree houses in the forest,” said the spokeswoman. Also, no parts of the forest would be cleared. The police invoked a search warrant of the Aachen district court.

The Hambacher forest between Cologne and Aachen. in the past few months, the Symbol of the resistance against brown-coal-fired power generation The RWE group intends to grub up a part of the forest, to increase the size of the adjacent open pit mine of Hambach. Clashes between activists and police came together. The higher administrative court in Münster imposed at the beginning of October by Eilbeschluss a grubbing-up stop. Since then, the forest is no longer operating site, but accessible to the public and is subject to the forestry act. Activists and public buildings, and the meadow camp.

taken In the RAID, three persons had been arrested, informed the police in Aachen on Twitter. You should splash on official “from a hut out with seeming urine” and have refused, out of the hut. After the use of pepper spray to escape have tried.

1/2 In the case of the search of the #camp Dismissed police officers were splashed out from a hut with seeming urine (appearance, odour). In the hut, three people who failed to comply with the repeated request to leave, there were. pic.twitter.com/fJK9VWMSHy

The crackdown is a response to the incidents of the past few days. On Christmas eve, and in the course of the night for the first day of Christmas, several Masked were thrown at the police, the security camp of RWE in Hambacher forest with Molotov cocktails and stones. Two vehicles caught fire, two more cars were damaged throws by stone.

the evening before had been taken by a RWE employees from a stone on the head and injured. On the Morning of the second Christmas holiday discovered RWE employees in a basic water-pumping station near the open-cast mine Hambach is a self-made incendiary device, which was subsequently defused by the police. It is determined for attempted premeditated arson.