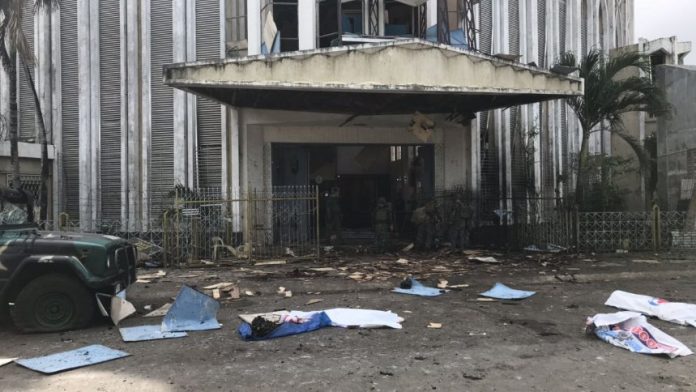 By two explosions in front of a Catholic Church in the troubled southern Philippines were killed during a Church service at least 27 people. A further 77 people were injured on Sunday, the police announced. The first Explosion had occurred during a mass Inside the Cathedral in the town of Jolo in the province Sulu, the second in a Parking lot in front of the house of God, as the security forces had arrived, said regional military spokesman Gerry Besana. First, no one confessed to the attacks. Among the dead, according to police, 20 civilians and 7 soldiers.

Jolo is located about 1000 km South of the capital, Manila. The chief of the national police, Oscar Albayalde, told the Manila radio station DZMM, so far nothing about a possible motive in the attacks is known, it will be determined in all directions. Besana said, first of all, the explosives were analyzed, and then conclusions on the perpetrators.

Minister of defence, Delfin Lorenzana, condemned the attack and stressed that the perpetrators would be hunted. All the churches and public places would be secured, to thwart potential attacks.

Decades of dispute with Muslim rebels

it was Unclear whether the attack in the predominantly Catholic country could be related with the result of a referendum in the southern Region of Mindanao over the formation of a new Muslim Autonomous entity, the Region of Bangsamoro. The election Commission had announced on Friday that the voters majority would have uniformly voted for Muslim autonomy. Only in the Bangsamoro belonging to the province of Sulu, Jolo is located, there was no majority for the Muslim autonomy.

The law for the creation of the Muslim Region, was a key part of a peace agreement in 2014 between the Philippine government and the largest Muslim rebel group, the Moro Islamic liberation front, had been closed.

Previously, had fought Muslim rebels for decades against the Central government. At least 150,000 people have died in the conflict. Some of the rebel groups – such as the militant Islamic group Abu Sayyaf, however, are more active. In 2004, attributed to the stop died in one of the group on a ferry in Manila Bay, with 116 people.

On the Catholic-dominated Philippines, Muslims make up less than ten percent of the population. They have accused the government several times in the past neglect.