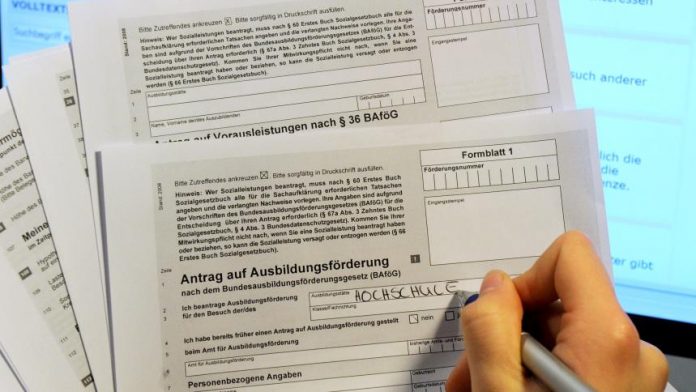 The Federal government wants to achieve that in the future more students will benefit from Bafög and that the Individual is a higher amount of remains. An increase in the maximum rate as well as higher rental expenses, grants and allowances to a Reform adopted by the Federal Cabinet on Wednesday. The Federal government wants to spend alone in this parliamentary term, more than 1.2 billion euros in addition.

details of the planned Bafög-amendment:

in the face of rising living costs the monthly living allowance for Federal financial aid recipients who do not live with their parents should increase, from the beginning of the winter semester of 2019 of 250 euros to 325 euros. In addition, the General Bafög-rates of 735 euros are to be raised to around 850 euros, and then in a second step, in 2020, to 861 Euro. In order for more students to benefit from Bafög payments, the increased allowances for the parents in several steps, because these are crucial for the Bafög entitlement of the children. The Reform also stipulates that a student loan remaining debt will be adopted after 20 years, in the event that people could not pay back the money until then. The Background: The amount of funding for a study will, in principle, granted only half as a loan.

The changes are meant to apply in the second half of the year, when the universities the winter semester starts.

“Especially families that are currently just above the income limits, will benefit in the future from the Bafög”, said Federal Minister of education, Anja Karliczek (CDU) to your reform project. The last word of the Bundestag, however, and when it comes to the Opposition, should revise the Parliament the draft law fundamentally.

the FDP, Left, Green, and AfD have considerable doubt that the desired reversal of the trend by Karliczeks reform plans can actually be achieved.

“the bottom line will continue to be a decline in the funded numbers,” predicts Kai Gehring of the Green. Also, the education trade Union GEW calls for thorough improvements, “the Bafög-amendment no mini-reform, but real Reform”.

the decisions of The government remain “far behind the increased cost of living,” criticized the WT-Vice-Chairman, Andreas Keller. “The residential package will not be sufficient to cover the planned increase to 325 Euro in many University towns, to find a place to Stay.”

Nicole Gohlke change criticized by the Left, that the increase in the funding rates “compensates the loss of purchasing power since the last Bafög-Novelle”. In addition, Rents increased in the large towns, faster than the residential fee. “Students with little money are forced on balconies or in the province.”

Other politicians make the current student loan System is basically out of the question. The FDP-MEP Jens Brandenburg, for example, is campaigning for one of the parents is independent of Bafög: “The personal career opportunities of young people need to be independent of the support force, or the will of the parents.”