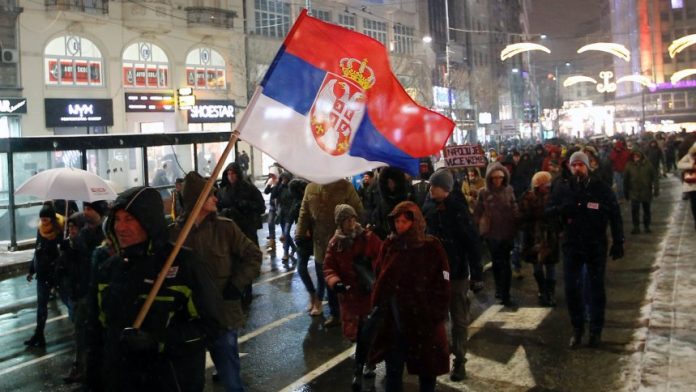 Well 15 000 people demonstrated on Saturday evening in Belgrade against the government of the Serbian President, Aleksandar Vucic. The Protestants went to the fifth Saturday in a row, and despite a snow storm on the road. The participants marched to the headquarters of the state TV broadcaster RTS, Vucic-True to strictly control.

The Protest was held under the Motto “One in five million”. The Slogan alludes to a statement by the ruling authoritarian Vucic, according to which he does not want to bow to the demands of the demonstrators, even if they were raised by five million people. Serbia has seven million inhabitants.

critics accuse Vucic, to govern authoritarian and the Opposition to suppress

Since the beginning of December, opponents of the government in Belgrade on the road. The original occasion of the demonstrations of the brutal attack on the Chairman of the Serbian Left, Borko Stefanovic, at the end of November in the südserbischen city of Krusevac.

The perpetrators are still unknown. The initially arrested Suspects were dropped before the turn of the Year due to lack of Evidence. Vucic condemned the attack – the opposition continues to make the President responsible. They accuse him of contributing to his aggressive rhetoric against critics and opposition, a climate of violence in the country.

The demonstrations are the first major protests in Serbia since the spring of 2017, after the election victory of Vucic thousands of mostly young Serbs on the road were gone. His critics accuse him of ruling in an authoritarian fashion and to make the Opposition, the media and the civil society is muzzled.