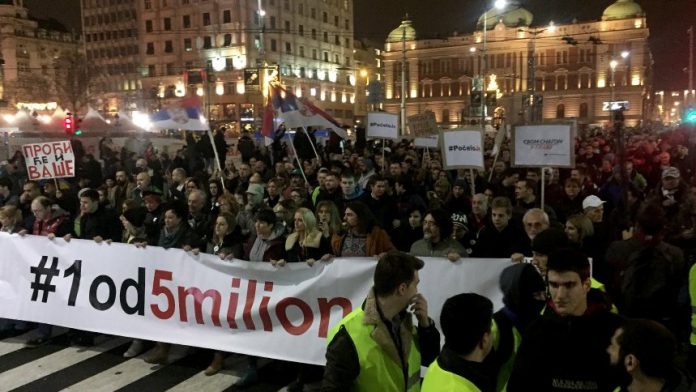 thousands of people have demonstrated in downtown Belgrade against the government of the Serbian President, Aleksandar Vucic. On their posters, it says “It has begun” and “as long As not all of them are free, nobody is free.”

It was the third Saturday in a row, the demonstrators under the slogan “stop went the bloody shirts” in Belgrade, on the road. The original occasion of the brutal attack on the Chairman of the Serbian Left, Borko Stefanovic, at the end of November in the südserbischen city of Krusevac. Men in black shirts had beaten him with an iron bar and severely injured.

The protesters were mainly against the government tolerated the use of violence against critics. To called the rallies an Alliance of opposition parties. The protests were also directed against the one-sided positive coverage of public broadcasting services for the government and Vucic.

Vucic condemned the attack on Stefanovic. The police arrested a Suspect. The opposition, however, continues to be the President for the fact responsible. They accuse him of contributing to his aggressive rhetoric against critics and opposition, a climate of violence in the country.