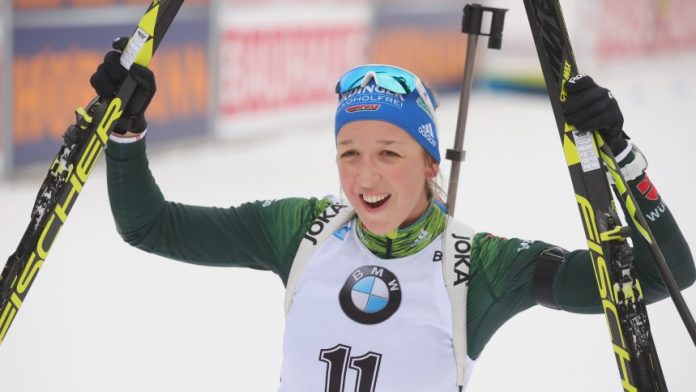 Franziska Preuß has won the mass start at 12.5 km in Ruhpolding. For the 24-Year-old is the first world Cup victory in an individual. Thanks to a flawless shooting performance, she landed in front of Norway’s Ingrid Landmark Tandrevold (no penalty, +0.2 seconds) and the Slovakian Paulina Fjalková (a, +15,1 seconds).

The decision fell on the last meters, as the Prussian was able to fend off the run strong Tandrevold. “The mass start is me. It is a crazy cool feeling to be at home in the living room at the very top,” said Preuss in the ARD Interview. Their best results so far have been two second places – also in the mass start.

The two-time Olympic champion Laura dahlmeier completed the race after six laps with a gap of 3:35,4 minutes on the 30. and last place. Previously Dahlmeier on Thursday was in the Sprint as the best German in the Ninth, after they had given in Ruhpolding after a health related break their Comeback.

The DSV-athletes Denise Herrmann (12. Place) and Vanessa Hinz (15.) making the top 15 rankings. Karolin Horchler and Franziska Hildebrand landed on the places 22 and 23.

In a earlier version of the text we called Karolin Horchler “Karin Horchler”. We have corrected the error.