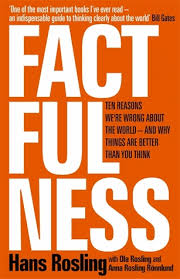 Rosling asks not to blame media for skewed worldview

Those who fight ignorance among people and try to establish a fact-based worldview tend to blame the media for giving them a very skewed worldview.

But Hans Rosling, a Swedish physician and public speaker, points out in his book “Factfulness” that such an attitude of finding scapegoats would end up failing to tackle real problems.

“Instead of pointing our fingers at journalists, we should be asking: Why does the media present such a distorted picture of the world?” he asks.

“Do journalists really mean to give us a distorted picture? Or could there be another explanation?”

Rosling asks people not to demonize journalists because they have the same mega misconception as everyone else.

“Journalists and documentarians are not lying when they produce dramatic reports of a divided world, or of ‘nature striking back,’ or of a population crisis, discussed in serious tones with wistful piano music in the background,” he said.

“They do not necessarily have bad intentions, and blaming them is pointless. Because most of the journalists and filmmakers who inform us about the world are themselves misled.”

Rosling, who passed away in early 2017 just ahead of the book’s publication, recommends that people should resist the urge to blame anybody because it’s almost always about “multiple interacting causes – a system.”

And he claims that reflecting reality is not something the media can be expected to do.

“It is completely unrealistic and unfair to call for the media to change in this way or that so that it can provide us with a better reflection of reality,” he notes.

“You should not expect the media to provide you with a fact-based worldview any more than you think it reasonable to use a set of holiday snaps of Berlin as your GPS system to help you navigate around the city.”

And then who is responsible for establishing a fact-based worldview? It’s ourselves according to the author who comes up with various ways to do so in the bestselling book.

Microsoft founder Bill Gates recommended the book as “An indispensable guide to thinking clearly about the world.”