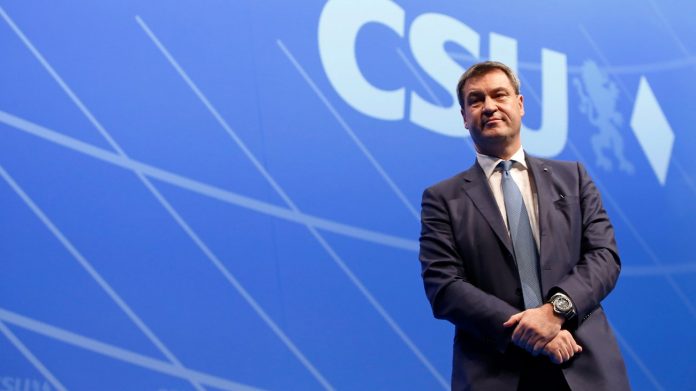 The Bavarian Prime Minister Markus Söder wants to be Chairman of the CSU. “After careful Consideration, and the desire of many members I am willing to put myself at the service of the party,” said the 51-Year-old in Munich. The successor of the former party boss Horst Seehofer is on a special party Congress on 19. January will be selected.

Söders choice is little doubt: Only on Saturday European leaders, Manfred Weber, had declared his resignation, as had the CSU land group in the Bundestag, Alexander Dobrindt. Other promising candidates are for the Post in view.

Söder announced in the light of the two severe CSU-down of reserves at the Federal election in September 2017 and, in the case of the Bavarian state election a month ago, the party working as a team in the future. “Together with the base and the mandate-holders, we intend to develop the CSU and renew,” he said. “Great challenges lie ahead of us. We can do it together.”

Seehofer had announced last week, to his office in January. With this step, the shrinkage will be responded to a stop in his party. For justification, he also said that in 2019, “should be the year of the renewal of the CSU”.

Seehofer was elected in 2008 for the first time, the CSU Chairman and served until March, the office of the Minister-President of Bavaria. This Post he had to give up on pressure from his party to Söder. He remained chief of the CSU, and the new Covenant was at the same time, the Minister of the interior.