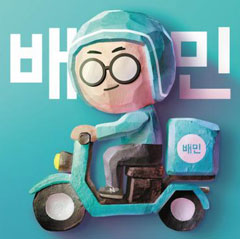 Under the $4 billion deal, the former will snap up an 87 percent stake in the latter, which operates Korea’s biggest food deliver app named Baedal Minjok.

As Delivery Hero runs the country’s No. 2 and No. 3 players of Yogiyo and Baedaltong, however, its market share would near 100 percent after the acquisition of Baedal Minjok.

Baedal Minjok’s market share is about 56 percent, while those of Yogiyo and Baedaltong are some 33 percent and 11 percent, respectively, according to Nielsen Korea last year.

As a result, the contract would be subject to the review of Korea’s Fair Trade Commission (FTC), which is by no means a rubber stamp in approving the merger between major companies.

For example, the iron-fisted anti-trust watchdog derailed an M&A between SK Telecom and CJ HelloVision in 2016, although their combined market share in the pay-TV business was less than 30 percent.

Back then, it took longer than half a year for the FTC to come up with its final conclusion.

In comparison, the FTC gave the green light to the M&A between Auction and Gmarket in 2009, even though they are the country’s top two e-commerce websites.

But the FTC said that it made such a decision because there were many other competitors in the country’s e-commerce business, including many online shopping malls.

From the perspective of end consumers, the FTC said there were no big concerns for market monopoly. In other words, they had many other options in buying something online other than Auction and Gmarket.

But this week’s agreement between Delivery Hero and Woowa Brothers may be different because end users would have little options but to choose one of the three major food-delivery apps held by the same owner.

Possibly to get the FTC approval, Delivery Hero reportedly plans to operate the three companies independently. But it remains to be seen whether the FTC would buy the explanation.

In making any determination, the FTC would have to put the interests of end-users on the front burner.

Delivery Hero is a Berlin-based global giant, which is doing business in more than 40 countries.

The outfit has proactively tapped into the Korean market by launching Yogiyo in 2012, a year after Baedal Minjok debuted, and gobbling up Baedaltong in 2015. Two years later, it also purchased FoodFly, a small-sized food-delivery app.