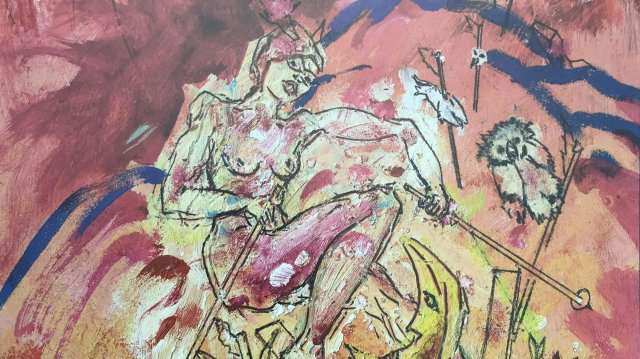 In Austria, there is a dispute about an advertising poster for the Ski world Cup in Semmering. On the artist-designed Poster is to be seen as the Central motif of a naked woman on skis – gored animal heads and a moon that looks out between the legs of the woman.

In the social media there were some sharp reactions to the work of Christian Ludwig Attersee: “Sexist”, “embarrassing” and “tasteless” were some of the comments.

The Austrian ski Federation (ÖSV) defended the poster, the two women’s races on the 28. and 29. December should apply. An ASF spokesman said that the posters remain, in spite of the criticism, hang on, apart from the internationally respected artist himself, decided against it.

promotional poster for the Alpine Ski world Cup in Semmering

In a letter to the Austrian advertising Council, and Johanna Mikl-Leitner, the head of government of the Federal state of lower Austria, regretted the Association, if “the state of mind of the viewers in any way” violated. Also Attersee is expressed according to the “courier” in the paper: “power, autonomy, and self-confidence of the women would be” positive.” The image represents the female Athlete “in action”, the nudity gave her “confidence in their environment”.

In the Alpine Republic for some time, revelations about sexual Assault in Alpine skiing. Former racer of the interior had made public, in the past, part of coaches molested and even raped.

Nicola Werdenigg, which had initiated the debate, criticized the poster of the “courier,”according to a report in as sexist. Add to this that the woman will be shown in a Pose that you’ll leave as a “patschertes Hotdogger” will appear. “Athletes are not associated with such motifs can be represented. I would appreciate it if the Association pulls the poster back.”