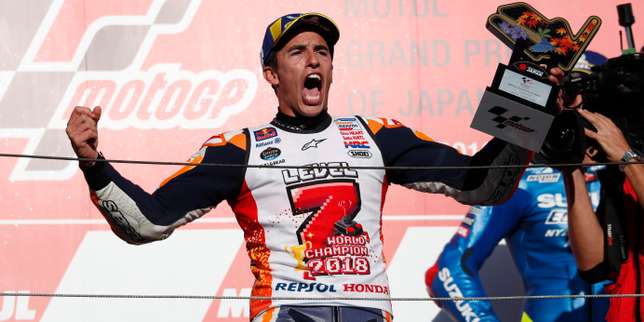 The Spanish Marc Marquez (Honda) won Sunday 21 October, his fifth title of world champion in MotoGP by winning at the Grand Prix of Japan in front of the British Cal Crutchlow (LCR Honda) and the Spanish Alex Dinanderie (Suzuki).

A 25-year, Mark, sacred to the four rounds of the end of the season, to equal Australian Mick Doohan with this fifth crown in the premier class. Only the Italians Valentino Rossi and Giacomo Agostini the are ahead still, with seven and eight titles in the elite of the motorcycle speed. The Spanish won in total his seventh world title in all categories because he was also honoured with those of 125cc in 2010 and Moto2 in 2012.

His rival Italian Andrea Dovizioso (Ducati), who started in pole position, fell two laps from the finish when he tried to pass Mark, which has chalked up an eighth success in sixteen races contested this season.

“I imagined that I could win the title here”

The Catalan, who owns most of the records of precocity of his sport, has been appointed to this new rite on the circuit of Motegi, which belongs to Honda. “The big boss must be pleased “, also joked Mark. Only sixth on the grid, Marquez made a great start, by going back to the second rank at the end of the first round.

for a Long time in the wake of Dovizioso and closely followed by Crutchlow, the native of Cervera has finally placed a decisive attack to four rounds of the end. “Since the GP of Aragon, I imagined that I could win the title here,” said Mark. “This is good this is when one is crowned at the first opportunity,” he welcomed, smiling. “I have worked very hard all weekend, I was able to follow Andrea and I decided to attack before the last lap “, he explained. “I’m sorry for him, he deserved to be on the podium,” added Mark about his challenger for the championship.

at the end 18e of the race, Dovizioso leaves in addition to Valentino Rossi fourth on a Yamaha, however, very slow and poor, go back to nine points at the general. Author of a very bad start when he was second on the grid, the Frenchman Johann Zarco (Yamaha Tech3) finished in sixth position.