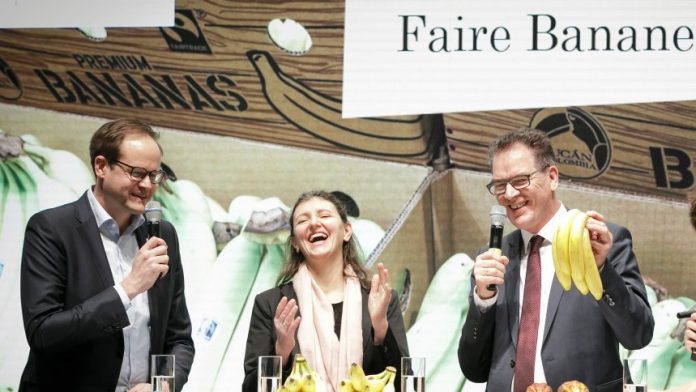 On the agricultural trade fair Green week in Berlin has argued, German development Minister Gerd Müller (CSU) for the more fair-traded food: He called on consumers and retailers to pay attention in the case of cocoa, bananas or coffee production to better working conditions. “Who sells bananas under a Euro a Kilo, takes children’s work”.

The trade should follow the Discounter Lidl, the chain had changed in October, completely fair-trade bananas. This should be the Standard. To speculate in the financial markets with food at the expense of the poor, is disgraceful. This needs to be banned.

Miller and Minister of agriculture, Julia Klöckner (CDU) reaffirmed the commitment of the Federal government for better living conditions of cocoa farmers, especially in West Africa. Müller said: “starvation wages, poverty, child labour and deforestation of the rain forests must finally belong to the past.” Klöckner emphasized the goal of 100 percent fairly traded cocoa to the German market. Also, thanks to a 2011 with confectionery manufacturers and retailers, launched the Initiative, 55 percent was generated by sustainable sources. The target is to increase this share by 2020, 70 percent.

More than 80 percent of the cocoa in Germany originate from Nigeria, Ghana and the ivory coast. On the cocoa plantations of two million children work.