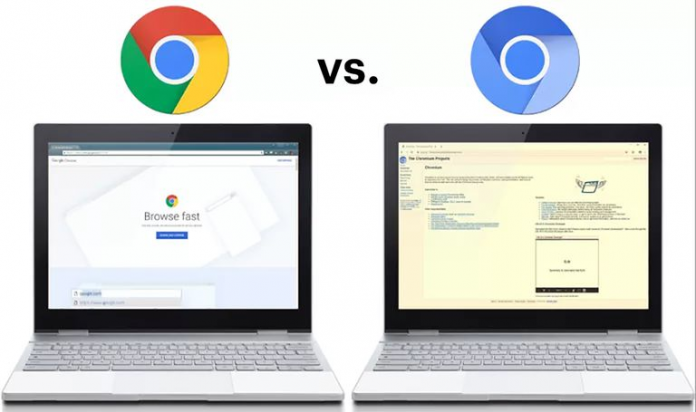 While most of us know Google Chrome and even use it as a default browser, we don’t really have an idea of a Chromium browser. Based on the name, it’s easy to deduce that the two are somehow connected.

You won’t be wrong – Chromium is, in fact, the original version of a Chrome browser, developed by an Open Source Chromium Browser.

This browser was first introduced in 2008, and its code laid the foundation for Google Chrome, the most popular browser. When Google Chrome was first released, Google published a code for chromium as well under MIT, BSD, and LGPL licenses.

So, two browsers share the two most significant differences:

Let’s take a look at what are these features, closely tied to Google, that Chrome has and Chromium doesn’t.

However, just because Chrome has these additional features while Chromium doesn’t, you shouldn’t yet rush with a choice. It’s not as obvious as it seems. Some of these add-ons are actually restrictions that slow the software down and limit possibilities – like add-on prohibition.

Even though Chromium is not supported by Google, it’s still tightly connected to the corporation and its search engine. This works both as an advantage and a disadvantage.

On one hand, integration with Google services enables effortless synchronization with Google Mail, Drive, Planner, and other popular services. On the other hand, Google’s influence in terms of tracking and collecting private data may still be present, although to a lesser extent. It’s a fine middle ground for those users who use Google services but like to keep their privacy in check.

The key features of Chromium include:

Chromium is mostly used by Linux users considering that it enables a lot of unique Open Source extensions and add-ons, developed specifically for Linux.

The browser is published directly on the Ubuntu Software Center page. After the software is installed, it will automatically update itself to the newer versions and receive security patches from Linux software repositories.

On Mac and Windows, official Chromium builds are somewhat half-baked. The browser has to be updated manually and installed from a third party. Another option is to compile new versions of Chromium from source code yourself if you are willing to go that far.

However, because the software s Open Source, its code is available to users for free. Hackers exploit this advantage and create a bunch of Chromium-based malicious browsers that self-install on the PC.

Sometimes these browsers have other names and interface but often they mimic the original design and functionality of Chromium.

The way to determine whether the browser is legitimate or malicious is to remember whether you have installed it or not. The distinctive characteristic of the majority of fake browsers is that they install without customer’s permission.

Malicious Chromium-like browsers cause a lot of damage to the system.

Does it make sense to use Chromium?

After going through these stories on malware, you probably can’t help but wonder. What’s the point of using Chromium if there is also a risk of infecting the system with viruses? A fair point, but the answer is not that clear.

For Windows and Mac users, it’s almost a no-brainer. Considering shaky Chromium update algorithms and unstable functionality, it makes sense to choose Chrome. However, for Linux users, Chromium’s functionality is, in fact, suited even better than Chrome’s features.

Linux users have more experience of using Open Source tools because a lot of them are created on Linux or for Linux. You can pack Chromium with additional Linux Open Source distributions and end up with a browser that would be much safer and more functional than Google Chrome.

So, if you are an active Open Source user, Chromium is a better option – it allows you to be creative, modifying functionality and customizing interface specifically to your personal needs. If that’s not the case, opting for Chrome is a safe choice.