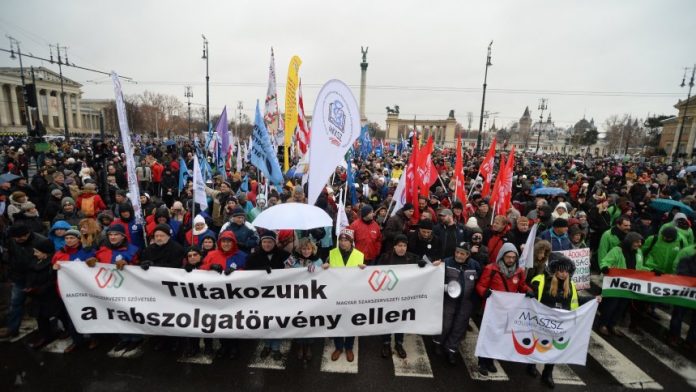 In Budapest, demonstrated on Saturday almost 10,000 people against the Hungarian government of the right-wing nationalist Prime Minister Viktor Orbán. After a March through the city centre, they went in cold and wet weather in front of the Parliament.

in December, there had been several large demonstrations. The occasion was the adoption of a new law that allows the employer to require their employees up to 400 hours of Overtime in the year. With the votes of the government party Fidesz, Parliament had approved the law in mid-December.

The Demonstration on Saturday was also against the new law. As the crowd chanted, for example, “We will not be slaves” and “Dirty Fidesz”.

The protests have become larger and are supported by the left as right-wing opposition parties, trade unions and civil society organizations. Many see it as the Chance of the authoritarian Orbán finally replace. “Today, the new Opposition was born against this man,” announced one of the speakers on Saturday.

The rallies are directed against other abuses under the Orbán-government, including as a one-sided and government-friendly criticized reporting of the public broadcaster, the restriction of the freedom of Science and the corruption around senior government officials and their families.

The ruling party is trying, however, see the protests as a staging of the liberal U.S. billionaire George Soros to dismiss. In front of the in may of this year, ahead of the European elections, Soros, mobilizing everywhere of those forces, the migration of critical governments, such as the Hungarian attacks, said a Fidesz spokesman on Saturday.