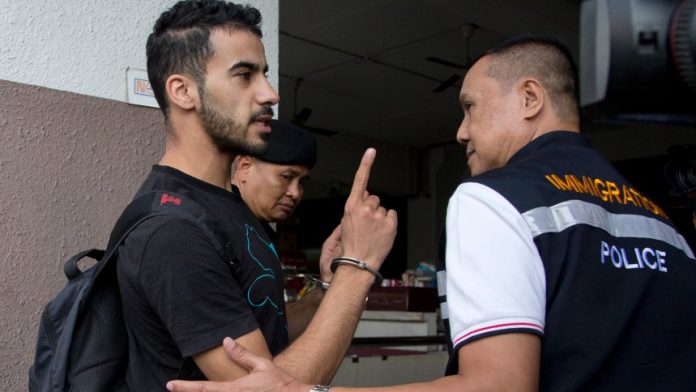 Bahrain has applied in Thailand officially, the extradition of the former football player Hakim Al-Araibi. The military government of the Southeast Asian Kingdom, confirmed Tuesday the receipt of the required documents.

The 25-Year-old actually lives in Australia, where he is as a political refugee. At the request of Bahrain, he was arrested at the end of November in Bangkok, where he wanted to catch up with his wife for the honeymoon.

The footballer was sentenced in 2014 in the authoritarian-ruled Kingdom of Bahrain in the Persian Gulf, in absentia to ten years in prison. To to 2011 during the Arab uprisings of violence involved. At the time, particularly the majority of Shiites went into Bahrain against the Sunni leadership, on the street. Also Al-Araibi is Shiite.

The player rejects all of the allegations. During the alleged time of the crime he stood according to their own figures for Bahrain’s national team in an international match against Qatar on the football field. Most recently, he played for the club, Pascoe Vale in the First division of the state of Victoria. The Club is in Melbourne at home.

Fifa and the IOC calling for release of Al-Araibi

The request for extradition from Bahrain will be tested in Thailand now, which can take months. A government spokeswoman left open, as the verification will fail. The final decision lies with a court. One of Al-Araibis lawyers, Nadthasiri Bergman, already announced, against the planned extradition of appeal. Currently, his client sits in jail.

The world football Association Fifa and the International Olympic Committee (IOC) calling for Al-Araibis release. The footballer plays as a Semi-professional for a club from Melbourne.

Also, the Asian football Federation, AFC has spoken on the process. In a letter to Vice-President Praful Patel called on the Thai Prime Minister to “take the necessary steps to ensure that Mr Al-Araibi could safely return to Australia”.