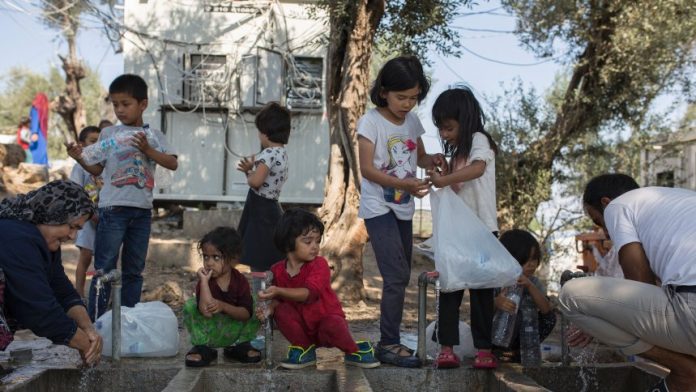 representative of the aid organization Oxfam, the living conditions of Pregnant women, unaccompanied children and Survivors of torture in Greek migrant camps, sharply criticized. Hundreds of protection, cities were vulnerable in the tent on the Islands of the Eastern Aegean sea, largely alone, the report says.

There is a lack of medical staff, and warm water. In addition, winter had advanced rains turned the camps into muddy swamps. The Greek government and the other EU States would have to be their responsibility towards the people, called Oxfam.

In the so-called Hotspot-bearing Moria on the island of Lesbos, nearly twice as many people as originally intended to be lived. Some of the women were passed out of fear of Attacks to wear night diapers to prevent toilet visits. “Moria is a dangerous place for women,” said a 36-year-old Kamerunerin a representative of Oxfam. “It can come at any time to Assault. Stones can fly at your head when you go from your tent to the toilet.” The closed the women’s area was not guarded at night, after 23 o’clock, everyone could get in. “Security is a big Problem for us.”

“70 people share a toilet, the Hygiene is very bad,” quoted a staff member of an NGO in Lesvos. “There are a lot of small children and infants in the camp. Some people don’t even have a tent, and now the Winter is coming. In the olive grove, there are snakes, Scorpions and rats.”

early Tuesday morning were found in Moria the corpse of a 24-year-old Kameruners. In the night the temperatures dropped below Zero. In particular, weakened the asylum seekers would have to as soon as possible on the mainland brought, called Oxfam.

in addition, Greece should be the challenge not left alone. It is essential that asylum-seekers, to distribute fair on the countries of the EU. The international community cannot agree, however, in a binding ratio to the distribution of refugees to all countries.

The Greek government is trying already for months to relax the Situation in the Camps. It has deprived thousands of protection, including families, single women and minors, to the mainland. According to the Greek migration Ministry at the beginning of January lived in and around the registration centers on the Islands of about 14,800 people. In October, there were about 20,000.