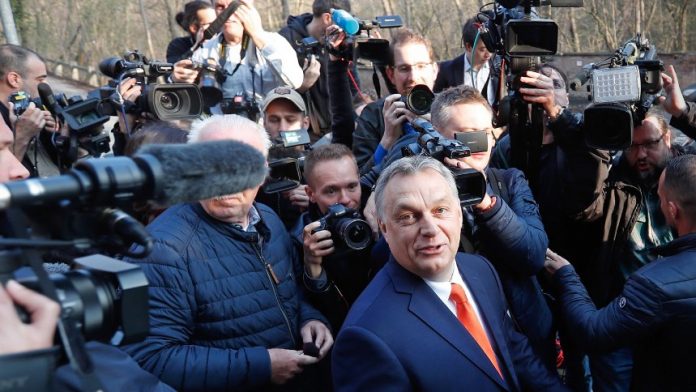 Hungary’s government-friendly media act as big part as clones. Who clicks, for example, these days through the Online portals of the four of the ten largest private Newspapers, the reporting on the current wave of protest to be considered against the Hungarian government, in addition to a identical web-site Design identical – and, of course, consistently negative messages about the protesters, published, respectively, points to the identical time. A well-involuntarily, as a cynical response to the demand of the protesters, the freedom of the press in the country.

the same Design and the same content is not enough, the government of Viktor Orbán, however, apparently. Therefore, recently, almost all private government were transferred to the nearby media in a single company: at the end of November “donated” Hungarian businessmen close to the Premier Orbán, virtually all of your press company is one of representatives of the government-led corporate body by the name of “Central European press and media-Foundation” – a gift without any formal consideration. A total of 476 titles from broadcast, Print and Online, nearly the entire spectrum of the private Pro-government media market in Hungary.

Two of the leading Hungarian experts for media analysis, Gábor Polyák and Ágnes Urbán from the Non-government organization” Mérték Médiaelemzés Mühely “live”, commenting on the merger: “the fact That different entrepreneurs, your million dollar company handed over all at the same time a Foundation exists nowhere else in the world. This tends to happen in movies about the Mob as a business.”

such A concentration of media must be tested according to the Hungarian law by the competition authority (GVH). But Orbán signed at the beginning of December a decree, according to which the Foundation of “national strategic importance”. He prevented an antitrust Review. More than spicy: In other cases, the competition authority was an important tool of the Orbán government, when it came, to crush the independent media.

The political orientation of the new media Foundation is no secret. It is headed by Gábor Liszkay, a to am extremely loyal to Orbán’s media Manager, was previously a CEO for many years in various media, Orbán’s party Fidesz. Last Liszkay was formally the owner of the daily newspaper “Magyar Idök” – the leaf is the voice of the Orbán-government par excellence. In addition, several Fidesz politicians are members of the Board of Trustees of the media Foundation, among other things, the Fidesz MP István Bajkai, the representative of the Orbán family for a long time with a lawyer.

It is also more efficiency

As the private Pro-government media are already bedingslos loyal to Orbán, would have been necessary that it actually does not merge in a single company. But Hungary’s Prime Minister has pulled with the new media Foundation a lesson from the break-up with his childhood friend, Lajos Simicska: Simicska two decades was the gray Eminence of Orbán’s party, and had built for you a media Empire, with him as the owner. The beginning of 2015, Orbán and Simicska had quarreled publicly. Then, waving Simicskas media overnight on a Orbán-critical line. His goal is to help the Opposition to victory, missed Simicska in April of this year. Therefore, he sold his media in the spring of Orbán-close to entrepreneurs and withdrew from the Public.

Although none of Orbán’s current entrepreneur has minions, the intellectual Format of Simicska. Since Lörinc Mészáros, Ex-mayor of Orbán’s home village and a former gas fitter, for example, is today one of the richest in Hungary. His entrepreneurial talent, he has no political ambition and thanks to his sudden rise to “the love of God, and Viktor Orbán,” as he once said.

Nevertheless, Orbán since the Simicska has become a Disaster, clearly mistrustful of his narrow environment, in politics and the economy. In addition, there are between some business people, that donated their media now “” rivalries. In this respect, Orbán should be the new Foundation of caution. In addition, it is also more efficiency. Orbán is rumored to be upset that the mostly loss-making government-related media, the great part with state funds for Advertising are kept alive, to a lot of money to be disbursed to the owners.

The well-known Hungarian investigative journalist, Attila Mong, who co-founded the Portal “Átlátszó”, says Orbán in its media policy now the mask can fall. “The business people have given away their media, are just straw men of Orbán’s grace,” says Mong. “The gift is not clear that the Orbán puts even more emphasis on the outer appearance.”