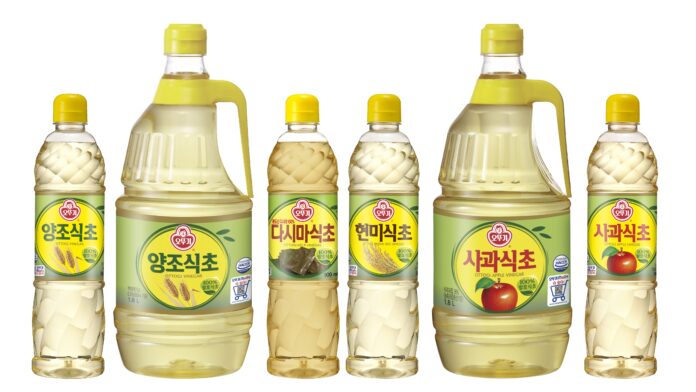 The history of vinegar is as old as alcoholic brewing, as the former’s first documented evidence stretches back to some 5,000 years ago in the ancient Babylonians.

When it comes to vinegar in South Korea, the country also braced for vinegar for its cuisines. But it had lacked a dominant player in the market before a homegrown company came to town.

It’s Ottogi, the country’s food giant that started rolling out vinegar products in 1977. Over the next 55 years, its sales total 700 million bottles to dominate the domestic market.

Behind its success was the effort to come up with innovative products, according to the Anyang, Gyeonggi Province-based corporation.

Ottogi added the unique flavor and taste of apple in 1984, which won the hearts and minds of end customers. In 2011, it launched a vinegar product made of plums to chalk up a notable success.

Plus, Ottogi is a pioneer in achieving a higher concentration of acetic acid by successfully doubling the acidity to 13~14 percent in 1993 for the first time in Korea and tripled it to 18~19 percent five years later.

The high-strength vinegar, which also can be used as an effective and chemical-free household cleaner, has brought about well-being trends in Korea.

And this time around, the food giant strives to achieve another feat by introducing vinegar products with the flavor and taste of tangleweed.

“The new product has a savory taste. Hence, we think that it would be loved by people. In addition, it is healthy as it contains some nine times more amino acids than previous ones,” an Ottogi official said.

“In line with our philosophy of promoting the health of humankind, we will keep developing a variety of good vinegar products down the road.”