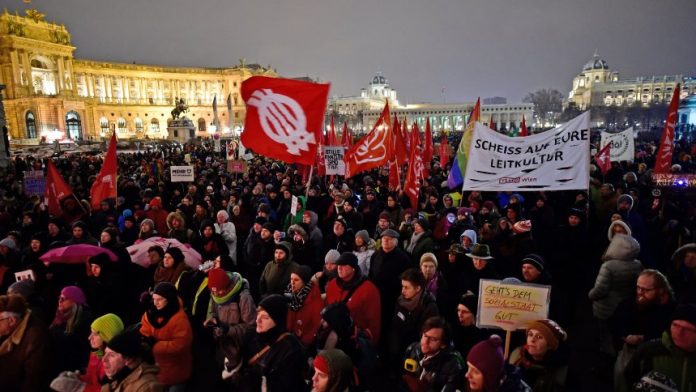 About 17,000 people demonstrated, according to the police in Vienna against the migration and social policy of the Austrian government. At the Demonstration against the right-wing conservative coalition under Chancellor Sebastian Kurz, left-wing groups like “grannies against the Right involved”.

The protesters were, among others, socks in the air; on posters with sayings such as “your policy stinks more than old socks” and “racism Socks”. Prior to the first anniversary of the formation of a government in the coming week, people also criticized a proposed headscarf ban in kindergartens and primary schools.

The rally was held under the Motto “Together against shift to the right, racism and welfare cuts”. Some of the demonstrators wore yellow safety vests, which became in France a Symbol of protest against the government of President Emmanuel Macron. In Paris had gone on that Saturday, thousands of people against the government on the road.

Short and its Vice-Chancellor Heinz-Christian Strache from the right-wing populist FPÖ pursued an Anti-immigration policy, which provides for, among other things, reductions for families with many children. The measure is aimed at families of immigrants but also Austrians.

A legal easing, which provides to employees for up to twelve hours of the day to work, also creates massive resentment. For the coming year, the government has announced a tax reform, the recipients should ease the burden on small and medium-sized income.