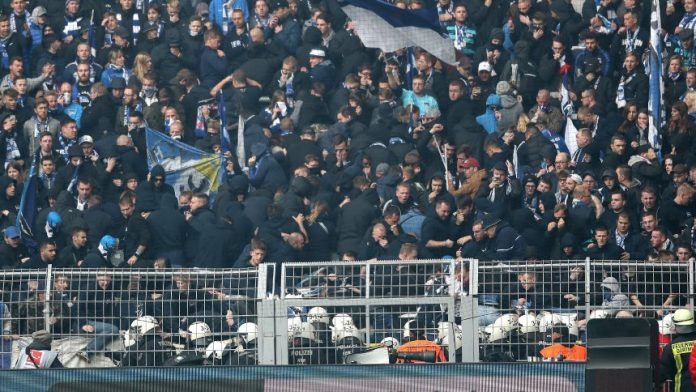 Following the violent clashes in Dortmund from 27. October must pay Hertha BSC a penalty in the amount of EUR 100,000, and, in addition, EUR 35,000 to the police Foundation of North Rhine-Westphalia transfer. This judgment the sports court of the German football Association (DFB) took.

The conflict between Berlin’s supporters and the police during the match between the Bundesliga League leaders BVB and Hertha (2:2) had fueled the debate about fan behaviour, pyrotechnics and security in German football again.

Hertha-trailer had gezündelt behind a Choreo-banner with the inscription “15 years of capital mafia”. Then step the police, who had been surprised of the massive riots, and later for the Intervention in the guest Block is justified.

@DFB occupied by Hertha BSC for unsportsmanlike conduct of its Fans at the away game in Dortmund with a fine of 100,000 euros. A third is spent on safety measures. Another 35,000 Euro, the Association pays to the police Foundation of NRW. #hahohe

The officers had been struck, among other things, with sewage pipes and pyrotechnics were thrown at them. Six police officers and 45 of the stadium visitors from Berlin are, at the time, according to authorities information injured – 35 injuries came about at the time, by the use of tear gas, ten people were injured due to violence by the police. In addition, the sanitary facilities in the guests were destroyed in the area almost completely of the Berlin spectators.

Of the 100,000 Euro fine can use Hertha after the DFB information up to 33,000 euros for safety, technical, infrastructural, and violence prevention measures. The Berlin have agreed to the judgment already given, it is final.