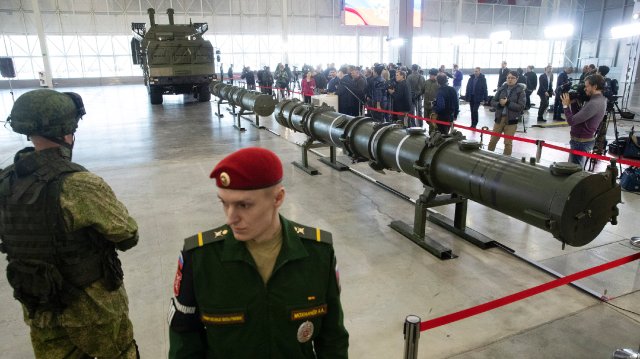 You really need to look twice to find the “9M729”. The labeling is in black lettering on the olive-colored missile container. Russian military to it along with a launch ramp and the previous model in the great hall in the Park, Patriot. Under the roof hang a Banner with the photo of President Vladimir Putin. His picture is also in the military-Disneyland with tanks, rockets and a replica of the Reichstag (read more here) everywhere.

In Kubinka, an hour’s drive southwest of Moscow, Russia wants the world to prove that it breaks the INF Treaty. The agreement, in 1987, of the Soviet Union and the United States has signed, prohibits land-based ballistic missiles and cruise missiles with a range of more than 500 kilometers. That is why Moscow presented on Wednesday for the first time in public details of the 9M729 (Nato designation SS-C-8).

It is the cruise missiles that the US and Nato say that it is a violation of the INF agreement, because he was flying much further than 500 kilometers. The US government had submitted in December 2018, within Nato, after long Hesitation, intelligence-information about the weapons system that convinced, apparently, until then, doubtful allies of the collapse of the INF Treaty. Washington and Moscow to 2. In February an Ultimatum to demonstrate that it complies with the contract. Otherwise, the USA will get out of the agreement.

The date in Kubinka, the military attachés and journalists, is part of a Moscow campaign. There are, however, published a dozen diplomatic representatives and Attachés of the USA, the UK, France and Germany, stayed away. Questions? Undesirable.

troops The mystery of the range

General Mikhail Matwejewski, head of the Russian rocket, announced data on the 9M729. He makes projections on the wall of the conference room to throw. The core of the lecture can be summarized as follows: The updated cruise missiles with greater explosive force has a range of 480 kilometers, which is ten kilometres less than the previous model. The new weapon is located 20 kilometers below the threshold at which you would the INF Treaty to violate.

Whether this is really the case, because there is doubt. Experts can conclude on the basis of the dimensions and the internal layout of the missile – roughly the size of the Tanks and the Warhead – on range. However, Russia is not presented at this appointment, the cruise missile itself, but only the Container is launched from the flight body.

The 9M729, according to the new Russian information, a diameter of 51.4 cm. To the length Moscow does not submit exact information, but it specifies the length of the container with almost eight meters. “The missile itself is, therefore, at least six, if not six and a half feet long,” says the Munich-based missile expert Markus Schiller. This would also fit with the previously known photos of the 9M729.

These dimensions are nearly identical to those of the U.S. “Tomahawk”Cruise missile, has a range of up to 2500 kilometres – five times what the Russians of the 9M729 claim. Although the range would be reduced drastically if the cruise missiles had a relatively large, heavy warhead, and a smaller Tank.

If this is the case, according to Schiller, but not understand. The MIRROR has him presenting the slides and photos from Kubinka, including images of the internal distribution of the 9M729 and of the predecessor 9M728. “The proportions don’t fit together,” says Schiller. “It is just a rough scheme.” Its verdict on the presentation: “The Russians feign openness, walls, but still.”

The presented container has a strikingly slim for a flight, the body should have a diameter of more than half a Meter. “In this Container, he seems not to fit in,” says Schiller. On previously available pictures of the tank 9M729 is much thicker in proportion to its length. What could mean this discrepancy is unclear.

In the hall of the Park, Patriot games, such Details do not matter, here it goes the images. The Russians want to demonstrate who bears the moral responsibility, if the INF fails to contract. We provide here but for transparency – so the message. However, the deadline comes far too late. It took years before they acknowledged the existence of the 9M729 of the rocket Builder Novator in Yekaterinburg in the Urals, part of the state armaments company Almaz-Antei, at all.

In Russia it is already convinced that the US wants out of that contract. Because China and North Korea have already cruise missiles covered by the INF agreement, which have been completed but only Russia and the United States.

to be injured Furthermore, Moscow complains that, in its turn, Washington on Wednesday, with its missile defense systems, the INF agreement. The US could fire with the launchers of the type Mk-41, stationed in Romania and also in Poland and positioned to be cruise missile on Russian soil. Experts consider that theoretically possible. The United States deny this, also here is more evidence.

Deputy foreign Minister Sergei Ryabkov Patriot, away from the stands in the hall in the Park. Satisfied, he watches as dozens of camera people, including international Teams from China and the United States, the cruise missile tanks shoot. He had just proclaimed in the dashing sound on the side of the Generals, now the United States were on the train.