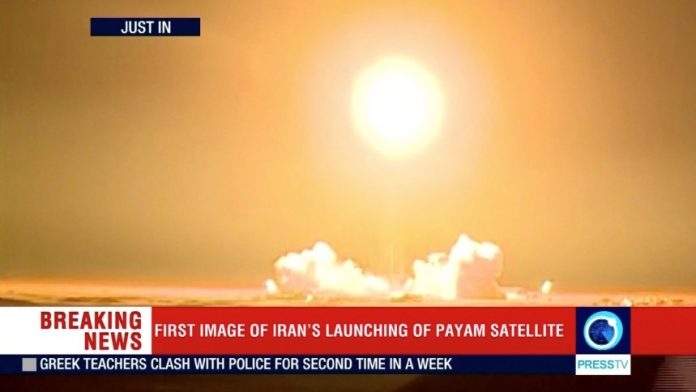 Iran must accept a setback in its controversial missile program: The satellite “Pajam” has failed in its orbit. He was started on Tuesday successfully with a carrier rocket, said the Iranian telecommunications Minister Mohammad Javad Asari Dschahromi on state television. The intended orbit, he had not achieved but “unfortunately”. Where the satellite is and whether he crashed, was not called.

Iran had announced on Monday to send in the coming days, two satellites in Orbit, and to gather information about the state of the environment in the country. “Pajam” and its carrier rocket, both of which had been produced “in our country, the youth of this Nation,” President Hassan Ruhani.

telecommunications Minister Asari Dschahromi had declared last week that the two satellites are called “Pajam” and “dŭstí” had been successfully tested. “Pajam” should revolve accordingly, in 600 km altitude around the earth to collect information about the environment. “Dŭstí” was on the way into Orbit, it said.

The United States had asked Iran at the beginning of January, to refrain from the rocket launch, and a provocation spoken. Foreign Minister Mike Pompeo evaluated the plans as a violation of UN security Council resolution 2231, which prohibits Iran any use of ballistic missiles, which can be used for nuclear warheads. Washington criticized for a long time, the Iranian missile program, and calls for its task.

The foreign Ministry in Tehran rejected the allegation that the plans would be in breach of the UN Resolution. If it were a “civilian project with a purely scientific aim”, and Iran is not going to ask anyone permission for such projects, said the foreign Ministry spokesman. Also of the claims of the United States to the task of the military rocket programme was rejected by Tehran categorically.

In the past, Iran has carried smaller satellites into space. In 2013, the country had proclaimed in addition to have a monkey into space shot. However, later, there was confusion as to the Mission – apparently, images of two different monkeys were released.