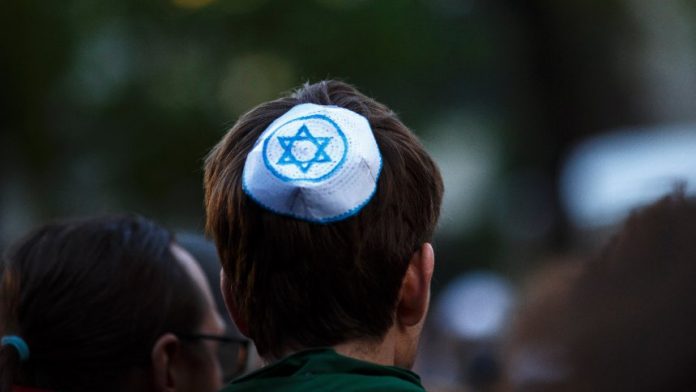 About one third of the EU citizens takes according to one study, an increase of anti-Semitism in his country. In the Jewish population, the proportion is much higher. The findings of a Eurobarometer survey published in Brussels. “Unfortunately, anti-Semitism does still its ugly head all over Europe,” said the Vice-President of the EU Commission, Frans Timmermans.

EU justice Commissioner, Vera Jourová said: “Nobody should be afraid to visit in the EU in a synagogue or wearing a kippah.” 27. January is International Holocaust remembrance day.

The Perception of EU citizens as a whole differs significantly from that of the Jewish population. A comparison of the new survey with a survey of the EU Agency for fundamental rights, which had surveyed in December, the Jewish population of the twelve EU member States. In the total population, 36 percent perceive, therefore, increasing anti-Semitism, Jews are 90 per cent.

Jourová stressed that the awareness of anti-Semitism in those countries is greater, in which large Jewish communities lived – among them also Germany. There are many people had Jewish friends, or have there been attacks on the Jewish community, on the media reported. In Germany, 61 per cent of the population perceive the growing anti-Semitism, in Sweden it is even 73 percent.

Basically, every second EU citizens (50 percent) consider anti-Semitism in his country for a Problem. In some countries, the awareness of hostility to Jews is significantly higher, also in Germany. Here, two-thirds of the population (66 percent) consider anti-Semitism as a Problem in France, even 72 per cent, and in Sweden, 81 per cent. EU-wide, every second Respondent is of the opinion that the Denial of the Holocaust constitutes in his own country is a Problem.

The survey, there is often also a lack of Knowledge about Jewish history and customs. Two out of three EU citizens is not stated, therefore, the population was particularly good (52 percent) or not at all (16 percent). In Germany, the ignorance is even greater. Here, three out of four respondents said people were not especially good (61 percent) or not informed at all (13 percent). 23 percent of Germans think even the Denial of the Holocaust in the Federal Republic of Germany is not a punishable offence.

the cause of this ignorance is to Jourovás opinion a lack of education. “Not only is education the key to the understanding of the Shoah as an abyss of humanity, but also for increasing awareness of anti-Semitism and how he is still alive in Europe,” she said. EU-wide, 42 percent of the citizens are of the opinion that the Holocaust won’t be taught enough in school. In Germany it is 36 percent.

the interior Ministers of The EU member States had adopted in December, a Declaration on the fight against anti-Semitism. In it, they demand, among other things, better protection of Jewish communities and institutions.