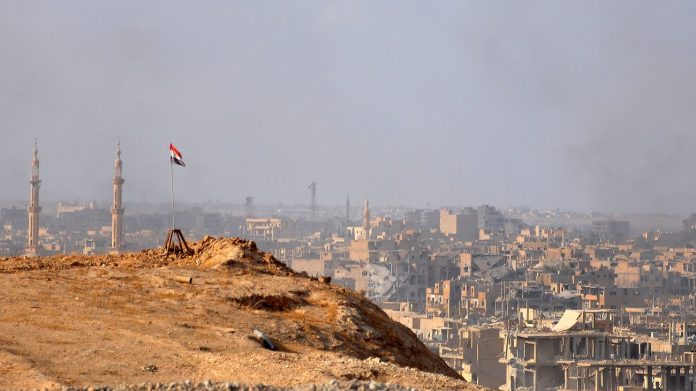 In the case of air attacks on the last of the terrorist militia “Islamic state” controlled territory in Eastern Syria appear to have been 43 people killed. The Victims were mainly women and children. The reports in Syrian state media and the Syrian Observatory for human rights, based in the UK. The information can not be validated independently.

the head of The Syrian Observatory for human rights, Rami Abdurrahman, said the air attacks early in the Morning had hit residential houses in the village of Abu al-Hassan. The village is located near the city of Hadschin, in the province of Deir ez-Zor to the Iraqi border. Among the 43 dead, 17 children and twelve women. Whether the killed men were extremists, is still unclear.

The state news Agency Sana reported, in Bukaan 40 people had been killed. The remote village is located in the vicinity of Abu al-Hassan. The IS-a mouthpiece for Aamak reported, citing an employee of the health service in the room Hadschin also of 40 dead.

The activist Omar Abu Leila, watching the war in Dair as-Saur in Europe, confirmed the attacks, but said that it was difficult to verify the number of dead. Members of the terrorist militia Islamic state prevented civilians from leaving the area. This is the high number of victims declare among them.

The US-led coalition air strikes in the Region confirmed. The U.S. military said in a communication, the Anti-IS coalition have carried out in the area between Friday evening and Saturday afternoon, 19 attacks, which were directed against positions of the IS. Not to be civilian casualties, it turned out that way. In a subsequent, first evaluation you had come to the conclusion that there is no evidence that civilians were to be found in the vicinity of the targets.

In the area there had been but ten more attacks, which were not from the coalition, and not coordinated with the run, – stated in the message. The IS have used in the past, contrary to the laws of war houses of worship and hospitals as command centers and civilians used as human shields, said Colonel Sean Ryan, a spokesman for the coalition, the AP news Agency.

troops The US-led coalition and its allies to ground, the mainly Kurdish Alliance, the SDF, have launched the Offensive against the last by the IS-controlled territory at the beginning of September. Since the 10. September were killed according to the Observatory for human rights, at least 191 civilians, including 65 children and 45 women. It was mostly Iraqis, presumably family members of IS members were among them.