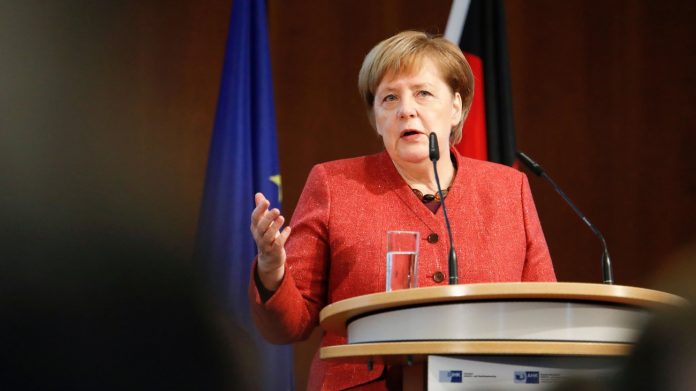 In the conflict between Russia and Ukraine, German Chancellor Angela Merkel has called for free access to the sea of Azov and to the Ukrainian city of Mariupol. You will raise the issue at the G20 summit in Argentina, with Russia’s President Vladimir Putin, Merkel said at the opening of the Ukrainian-German economic forum in Berlin. A solution to the conflict will give it but only in conversation. “There is no military solution.”

Ukraine, he added, “to be wise”. The Ukrainian President Petro Poroshenko had asked Germany and Nato to provide military support in the conflict of his country with Russia. This Poroshenko continued, in particular, to the aid of Merkel’s. “In 2015, she has saved through their talks in Minsk once of our country, we hope that you will support us along with our other allies once again, so much,” he said justifying his expectations of Merkel. She has already turned on in the conflict, and only with Poroshenko, and then with Putin on the phone. Russia described the appeal of the Ukrainian President to deployment of Nato ships as a provocation.

On Sunday, had applied to the Russian coast guards, three boats of the Ukrainian Navy in the Kerch Strait near Crimea. A number of the Ukrainian Navy soldiers were wounded, a total of 24 crew members were detained. Ukraine had imposed the martial law. Merkel spoke out strongly for keeping “things are quiet”. It was not, “that we put the facts of what happened, on the table, that the soldiers not be released as well, that you abpresst also confessions”.

With a view to the Ukrainian city of Mariupol, “which is dependent on the access to the sea,” Merkel said that “this city will not be cut off simply and, indirectly, other parts of the Ukraine are not freely accessible”.

Turkey is considering the Acquisition of an intermediary role in the conflict. President Recep Tayyip Erdoğan said after telephone conversations with Putin and Poroshenko, this possibility would be discussed with both sides. Erdoğan announced that he, too, will talk on the sidelines of the G-20 summit with Putin and U.S. President Donald Trump about the tensions in the sea of Azov.