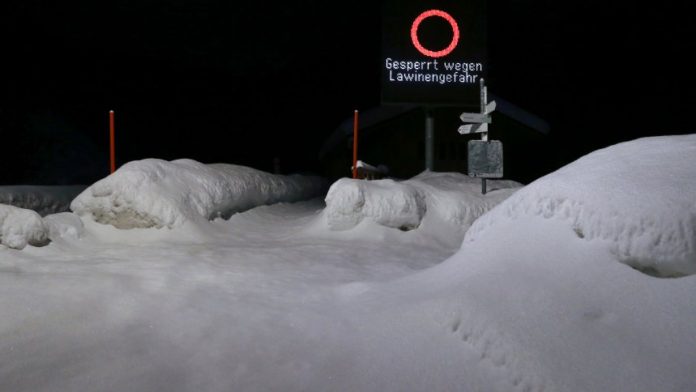 The duration of the snow in the Alps has already caused the first weather records of the year. “We have now six weather stations with historical precipitation records,” said Andreas Friedrich, spokesman of the German weather service (DWD). In Reit im Winkl, Kiefersfelden, victory village, Sigmarszell, in the middle of the forest and the wood churches, the historical maximum values for January are exceeded already now.

In Kiefersfelden was more than three times the long-term average value of the low-recorded beats. Between 200 and more than 300 litres of precipitation – in the Form of snow per square meter were measured until Tuesday at the weather stations of these places.

record the amounts of precipitation are developing on the Zugspitze. There 423,1 liters of precipitation fell in January already – the historical record from 1968 is € 438.3 m litres. “The record is only a matter of days,” said Friedrich, in view of the expected new snow.

Balderschwang were at least over a road accessible again

the snow depth records also achieved in the area South of Munich. In wooden churches was broken with 82 inches of snow already and the winter record of the year in 2006, while at the Station Oberhaching 58 inches of snow were measured. There, the previous high was 56 centimeters on the 17. February 1942 exceeded.

Relaxed and swung the situation, however, in soon. The Bavarian winter sports resort is, at least on a road for all accessible again. The road connecting the village in the Allgäu and the Austrian Hittisau is since Tuesday lunch is passable again, said a spokeswoman for the district office oberallgäu in Sonthofen. The road had been closed because of an Avalanche.

The Riedberg pass, on the Balderschwang is normally of Germany, are likely to remain until Wednesday morning blocked. Lifts and ski trails should also be open on Wednesday. The passport was in the last days for the rescuers and to supply the residents and guests, while passable, for the General public but locked.

lifts and ski trails are open in the ski resort on Wednesday.

the avalanche danger in the Allgäu “stay home!”