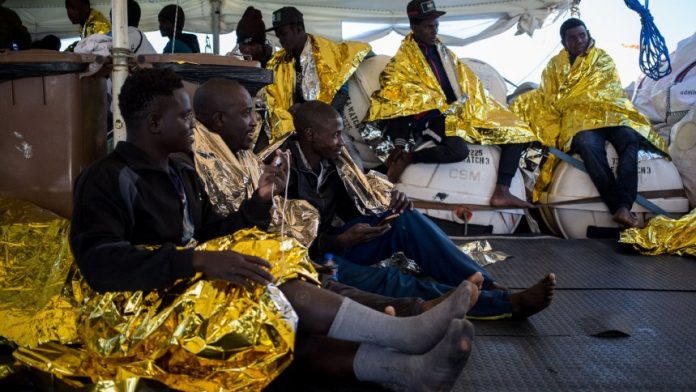 Due to a wind storm steers to the rescue ship, the German aid organization, the Sea-Watch in the direction of Italy. “The East of Sicily is the only place where we get to before the storm (…) protected,” said Sea Watch spokesman Ruben Neugebauer, the news Agency dpa. There is no break-in permission for the “Sea-Watch 3” – neither in Italy nor in Malta.

“The Sea-Watch3 seeks protection from up to 7 meters high waves, rain and icy Wind,” wrote the German aid organization in the short message service Twitter, followed by the call: “Europe, we need a safe port!” The Italian Minister of the interior Matteo Salvini affirmed that the ports of his country for rescue vessels to be closed.

For all who can imagine a 7m wave in the #Mediterranean sea, difficult:

starting From 2m, it is uncomfortable on the #SeaWatch3. the

5m, we begin to make us Worry.

6m, and more: We need a #port ofsafety, now! pic.twitter.com/lHPERm7P6o

The Dutch-flagged aid ship “Sea Watch 3” had the immigrants and asylum seekers on Saturday in front of the Libyan coast. Since then, the nearest EU countries of Malta and Italy refuse, in spite of an approaching storm, to allow the ship to dock. According to the Maritime course tracking websites, the “Sea Watch 3 was the” last in the direction of Sicily.

Italy’s Deputy Prime Minister, Luigi Di Maio of the populist Five star movement, called on the crew of the ship, to take a course on France and the inmates go in Marseille – “instead of waiting for days and days unnecessarily in Italian waters”.

20 non-governmental humanitarian organizations, including Save the Children, Amnesty International and Doctors without borders addressed an urgent appeal to Italy and Europe: The people should be released “immediately in a safe port”. Safety and protection of people live for a “highest priority”. Italy and all of Europe deceive a responsibility to ensure that there are no “new tragedies”took place on the sea.