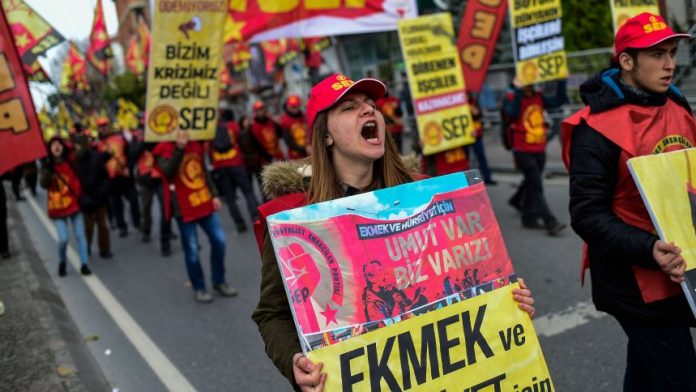 thousands of people in Istanbul against the rising standard of living and the high inflation rate in Turkey demonstrates. It is the second Demonstration in less than a week. Previously, there was a protest March in the Turkish city of Diyarbakir.

Since August, the Turkish economy is in crisis. The Inflation reached in October, a 15-year High of 25.24 percent. In November, the value of improved on 21,62%, goods for everyday use are in Turkey, but still expensive. “Work, bread, freedom,” chanted the protesters and called for an urgent reduction in price.

the Initiator of the Demo, the trade Union Confederation KESK, the trade unions for the public service are closed. A massive police presence, the movement, for the Turks, among others, from the North-Western provinces of Edirne, Bursa and Yalova accompanied arrived.

In the Demo, there was also a silent Protest against the head of the government Recep Tayyip Erdogan. “June” is emblazoned on some of the posters, with the help of some of the protesters, an allusion to the mass protests against Erdogan in the year 2013.

in Addition, there was during the Demo numerous allusions to the movement of the “Yellow vests” in France, which had formed as a Protest against high fuel prices.

Already almost a week ago, the KESK had called for a demonstration against the high cost of living in the Southeast Turkish city of Diyarbakir with several thousand participants. The background of the crisis, the dramatic fall in the price of the Turkish Lira. The currency has lost within a year, more than 40 percent of their value in relation to the Euro.